24 Ways Your Office job is Destroying Your Health

After reading this I can’t think why anyone would want to go to work!  It also makes me want to write an article about all the positive reasons for going to work.  Although for me – being self-employed –  the negatives obviously outweighed the positives! 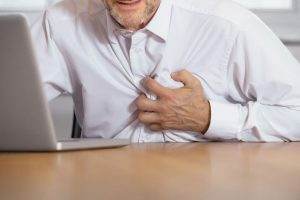 JACQUELYN SMITH Business Insider Thursday 28 April 20160 comment.
Warning: Working in an office can seriously damage your health Rex Features
The stress, long hours, and sedentary nature of your modern office job are sucking the life out of you — literally.

And it’s not just the tight deadlines, stress-eaten doughnuts, and sneezing coworkers that are doing you in. Even your keyboard can be out to get you.

From the printer to your manager, the dangers presented in a typical office can have real effects on your physical well-being and mental health. Need a reason to overhaul your habits? Look no further.

Sitting all day could shave years off your life

Sitting for lengthy periods is terrible for your body. Aches and pains are the least of your problems — sitting too much can lead to an early death. You face a higher risk of muscular skeletal disorders, obesity, diabetes, cancer, heart disease and more, even if you work out regularly.

Around 86% of workers sit all day at work. If you’re one of them, Alan Hedge, a design and ergonomics professor at Cornell, recommends you change to positions every eight minutes, and take a two-minute “moving break” at least twice an hour.

Regularly slouching in your chair can lead to long-term illnesses

If your job requires you to sit most of the day, it’s best if you get a sitting device that allows you to straighten your poor posture. If not, you’re “contributing to a pool of chronic, long-term ailments — including arthritis and bursitis”.

Skipping breakfast puts your body in a constant stressful state

Always on the run and don’t have time to eat the most important meal of the day? Doing this consistently will put your body in a stressful state and disrupt your metabolism.

People who don’t eat breakfast have a greater risk of high blood pressure, being overweight, and having heart issues compared to those who regularly eat within two hours of waking up. 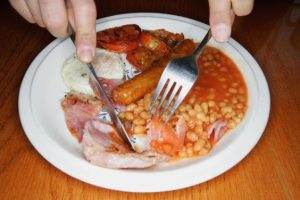 Unhealthy: eating junk food and skipping breakfast (Getty)
Most office-folk go out for an unhealthy lunch once in a while — some more than others — but even the occasional indulgence has negative effects.

A portion of fast food usually has around double the calories to another similar food of the same size, and it has a lot of oxidized fat, which increases the risk of heart disease.

Long commutes can lead to poor sleep, higher cholesterol, and an increased risk of depression
READ MORE
16 unprofessional email habits that make everyone hate you
Commuting more than 10 miles by car can lead to higher blood sugar increased cholesterol, according to a study from the University School of Medicine in Saint Louis and the Cooper Institute in Dallas. It can also increase your risk of depression, anxiety, and general misery.

But public transport is no picnic, either. One UK study found that people who commute 30 minutes by bus have the lowest levels of life satisfaction, and even cyclists weren’t immune to the ill-effects of long-distance travel.

In order to get workers excited about the company’s mission, employers may host team-building exercises or motivational meetings.

But research has shown that forcing people to feel positive for something they’re unsure about can actually “highlight how unhappy they are” and, ultimately, will make them even more depressed.

The United States Environmental Protection Agency calls it “Sick Building Syndrome.” The air inside a building can be up to 100 times dirtier than outside, and you’re exposed to a variety of unhealthy gases and chemicals.

There are pollutants in the air conditioning, toxic particles, dangerous bacteria, and mold all flying around, especially in buildings that aren’t well taken care of.

Over-exposure to printers and photocopiers could lead to lung disease

Photocopiers are a source of potentially deadly ozone if the filter isn’t periodically changed, and it’s possible that even very small amounts can cause chest pain and irritation.

Laser printers do this, too, and they also release toner particles that can get in your lungs and blood stream, which could lead to lung disease and other ailments.

If you use a laptop on your lap instead of a desk, you can experience skin problems from the heat, and there’s even more concerning news for men.

Researchers at the State University of New York found that laptops can raise the temperature of the scrotum, which could lower a man’s sperm count.

European researchers found that people who work 10 hours or more every day have a 60% greater risk of a multitude of cardiovascular problems, including heart attack and angina.

Working for a bad boss can contribute to anxiety, unhealthy habits, and even heart disease

One Swedish study cited by the Washington Post found the chronic stress of a bad boss was linked to an elevated risk of heart disease — and the longer you work for that person, the worse the problem seems to become.

That’s just the beginning. Other studies have shown that working for an unfair boss may contribute to a host of other complaints, including depression, sleep issues, high blood pressure, and being overweight.

Obesity: working long hours can lead to weight gain (Dominic Lipinski/PA Wire)
Those who mostly work in the evenings — such as programmers — are at greater risk for Type 2 diabetes, cancer, and heart disease.

As tested by Harvard researchers in 2009, people who woke up later in the day showed a decline in leptin, a hormone responsible for curbing appetites, and an increase in the stress-related hormone cortisol.

Endlessly staring at a computer screen harms your vision

Even though computer screens don’t give off radiation, the strain from staring over long periods of time can cause harm to your vision, though many effects are temporary. Beyond that, you can also experience headaches and migraines.

Not getting enough sunlight can make it harder to fall asleep and more difficult to concentrate when you’re awake
READ MORE
City workers face clampdown on Square Mile’s drinking culture
Parents with sleep struggles of their own tend to report sleep disturbances in their children.

Artificial light doesn’t just give your skin an unflattering greenish cast — it also messes with your internal clock, making you sleepy and sedentary.

A study in the “Journal of Clinical Sleep Medicine” found that employees who weren’t exposed to natural light at work slept an average of 46 minutes less a night than their peers with windows — and the sleep they did get was less restful.

It’s not just hyperbole — you can actually be bored to death.

A study from University College London suggested that those who complain of boredom are more likely to die young, and those who report high levels of tedium are much more likely to die from heart disease or stroke. It also puts you at higher risk for workplace accidents.

Dirty keyboards are as dangerous as E. coli and coliforms

Keyboards can be a breeding ground for bacteria if not kept clean.

Microbiologists found that keyboards can even have up to five times as many bacteria as a bathroom, and can include dangerous ones like E. coli and coliforms — both commonly associated with food poisoning — along with staphylococcus, which causes a range of infections.

Germs are everywhere in the office

Your keyboard isn’t the only bacteria farm in the office. Door and faucet knobs, handles, elevator and printer buttons, handshakes, and more are all hotspots for bacteria. Microbes are everywhere, and some can even kill you.

Typing too much leads to carpal tunnel syndrome

Chained to the computer: keyboards carry germs and can cause RSI and CTS (Picture: Getty)
Excessive amounts of typing is a well-known cause of carpal tunnel syndrome (CTS), which is a painful wrist strain that can go up your arm. CTS can get bad enough to cause permanent nerve damage and muscle wasting.

Open-office plans may be trendy, but they’re also drastically more likely to make you sick

Nearly 70% of offices have ditched cubes for open plans, but while that may (may) increase some kinds of communication and collaboration, it’s also making us sick.

A Danish study found that as the number of people working in a room increased, so did the relative number of sick days — and people who worked in fully open offices were out 62% more than their cubed counterparts.

You get stressed out when you have to meet a strict deadline, which can affect your learning and memory according to Science Daily. This sort of short-term stress can be just as bad as stress that lasts weeks or months.

If your mouse stays in the same spot all day, you can be prone to repetitive strain injury (RSI).

Upper limb RSI occurs when your tendons are straining more than they should for long periods of time, which can be because of movement repetition, a sustained awkward position, or prolonged pressing against hard surfaces.

Smartphone overuse may eventually weaken your hands and wrists

People who use their smartphones heavily to text and email are prone to muscle fatigue and iPhone thumb, which is a type of RSI.

The effects can get so bad that the pain can reach all the way up to your wrist and can be utterly debilitating to your hands.

Those power shoes you’re wearing might make you feel tall and confident, but they’re also harming your body in surprising ways.

Between 2005 and 2009, women’s visits to doctors for their feet increased by 75%, according to the American Academy of Orthopedic Surgeons.

Wearing uncomfortable shoes can lead to spinal injuries, muscle spasms, and even chronic headaches and migraines. Furthermore, the more pain you feel, the more likely you’ll sit for longer periods, which leads to a slew of health problems on its own.