Lost Art Of Bending Over: How Other Cultures Spare Their Spines

This is a very good article by Michaeleen-Doucleff. She promotes the use of the hip hinge – an exercise we do in Pilates on a regular basis.

Lost Art Of Bending Over: How Other Cultures Spare Their Spines 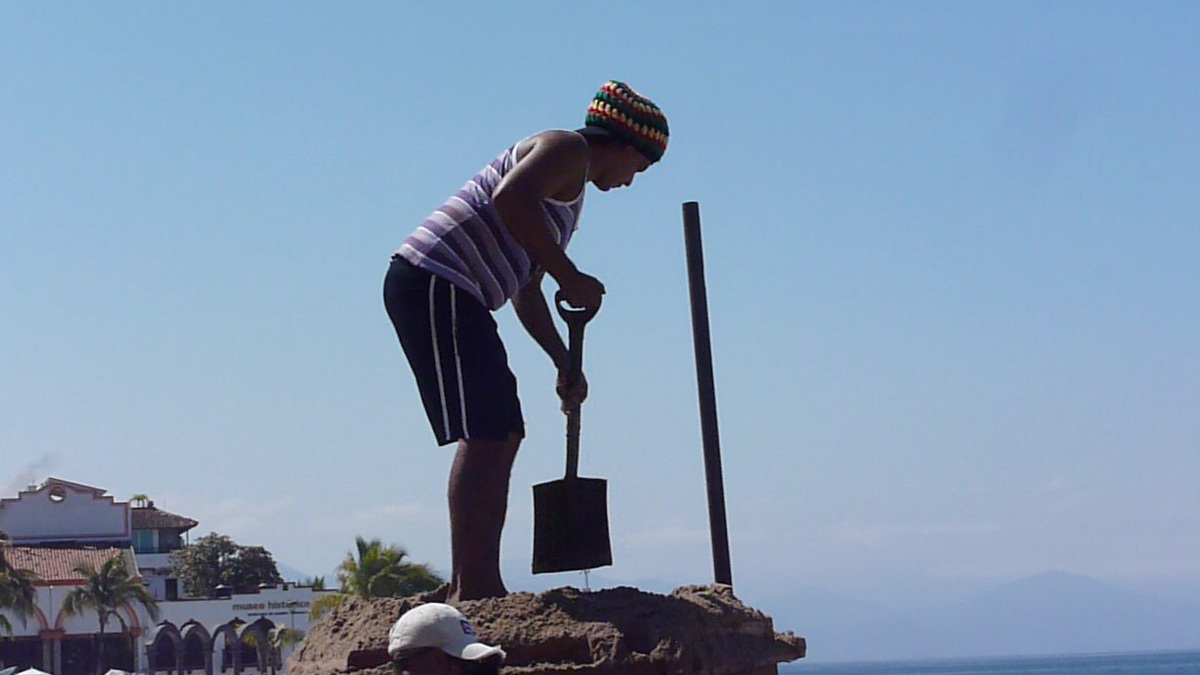 A man bends with a beautiful hip hinge in Puerta Vallarta, Mexico.
Courtesy of Jean Couch

To see if you’re bending correctly, try a simple experiment.

“Stand up and put your hands on your waist,” says Jean Couch, who has been helping people get out of back pain for 25 years at her studio in Palo Alto, Calif.

“Now imagine I’ve dropped a feather in front of your feet and asked to pick it up,” Couch says. “Usually everybody immediately moves their heads and looks down.”

That little look down bends your spine and triggers your stomach to do a little crunch. “You’ve already started to bend incorrectly — at your waist,” Couch says. “Almost everyone in the U.S. bends at the stomach.”

Lost Posture: Why Some Indigenous Cultures May Not Have Back Pain
In the process, our backs curve into the letter “C” — or, as Couch says, “We all look like really folded cashews.”

In other words, when we bend over in the U.S., most of us look like nuts!

But in many parts of the world, people don’t look like cashews when they bend over. Instead, you see something very different.

I first noticed this mysterious bending style in 2014 while covering the Ebola outbreak. We were driving on a back road in the rain forest of Liberia and every now and then, we would pass women working in their gardens. The women had striking silhouettes: They were bent over with their backs nearly straight. But they weren’t squatting with a vertical back. Instead, their backs were parallel to the ground. They looked like tables.

After returning home, I started seeing this “table” bending in photos all around the world — an older woman planting rice in Madagascar, a Mayan woman bending over at a market in Guatemala and women farming grass in northern India. This bending seemed to be common in many places, except in Western societies.

“The anthropologists have noted exactly what you’re saying for years,” says Stuart McGill, at the University of Waterloo in Ontario, Canada, who has been studying the biomechanics of the spine for more than three decades.

“It’s called hip hinging,” McGill says. “And I’ve spent my career trying to prove it’s a better way of bending than what we do.”

When you hip hinge (left), your spine can stay in a neutral position, while the hips and upper legs support your body weight. When you bend at the waist, the back curves, putting stress on the spine 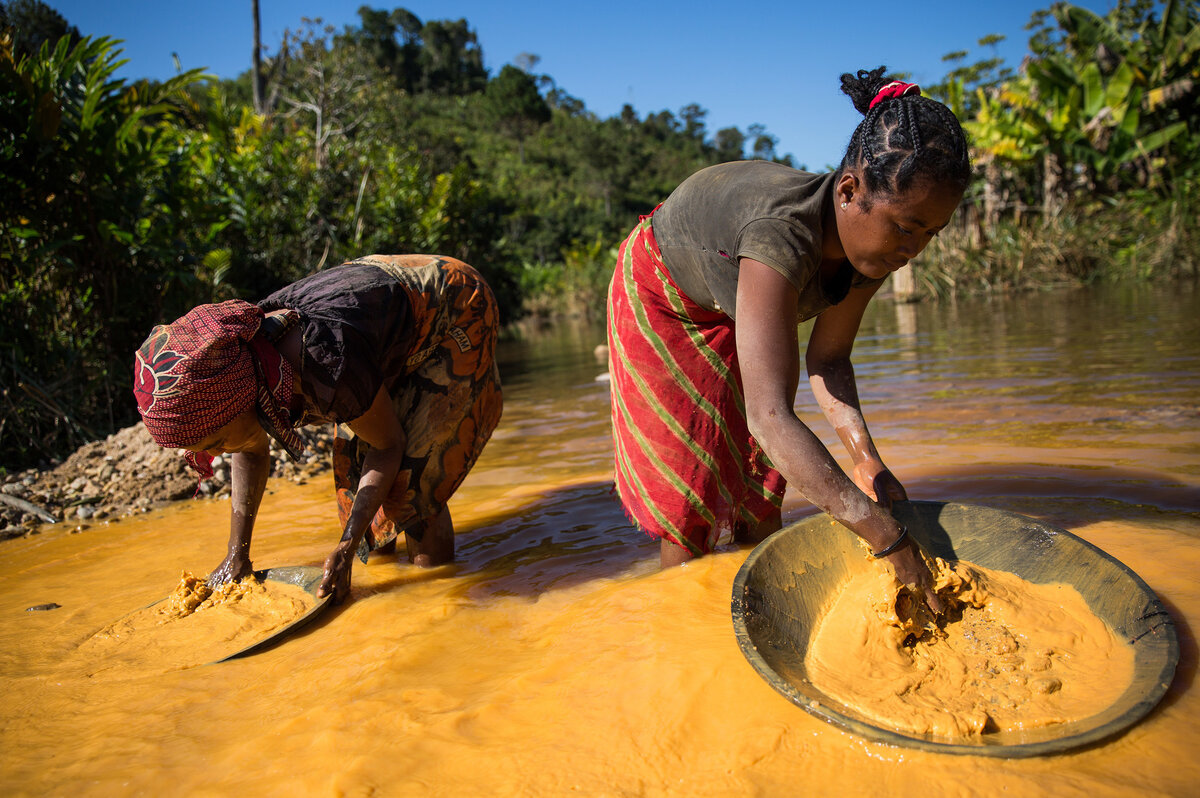 Rice farmers in Madagascar pan for gold to supplement their income.

When people bend with the cashew shape in their back — like we often do — they’re bending their spine. “That puts more stress on the spinal disks,” McGill says.

Disks are little rings of collagen found between each vertebra, which form a joint. But they aren’t made for tons of motion. “They have the mechanical characteristics of more like a fabric,” McGill says.

“If you took a cloth, and you kept bending and stressing it, over and over again, the fibers of the weave of the cloth start to loosen up and delaminate,” he says.

How To ‘Table’ Bend

To hip hinge:
1. Place your feet about 12 inches apart.
2. Keep your back straight.
3. As you bend your knees, allow your pubic bone to move backward.
4. Fold over by allowing your pubic bone to slide through your legs, down and back.

Bending motion GIF
Source: Courtesy of Jenn Sherer/Spinefulness
Eventually, over time, this fabric can fray, which puts you at risk of slipping a disk or having back pain.

On the other hand, when you hip hinge, your spine stays in a neutral position. The bending occurs at the hip joint — which is the king of motion.

“Hips are a ball and socket joints,” McGill says. “They are designed to have maximum movement lots of muscle force.”

In other words, your boots may be made for walking, but your hips are made for bending.

“Bending at the hip takes the pressure off the back muscles,” says Liza Shapiro, who studies primate locomotion at the University of Texas, Austin. “Instead, you engage your hamstring muscles.”

And by “engage the hamstrings,” she also means stretching them.

“Oh yes! In order to hip hinge properly, your hamstrings have to lengthen,” Shapiro says. “If you have tight hamstrings, they prevent you from bending over easily in that way.”

Tight hamstrings are extremely common in the U.S., Kennedy says. They may be one reason why hip hinging has faded from our culture: Stiff hamstrings are literally hamstringing our ability to bend properly.

But hip hinging isn’t totally lost from our culture, Shapiro says. “I just saw a website on gardening that recommended it, and many yoga websites recommend bending at the hips, too.”

Toddlers younger than 3 years old are great hip hingers. They haven’t learned yet from their parents to bend like a cashew.

Whether or not hip hinging will prevent back pain or injuries, doctors don’t know yet, says Dr. D.J. Kennedy, a spine specialist at Stanford University and a former weightlifter.

“We don’t have these randomized trials, where we have people lifting things hundreds of times and see how their body responds to hip hinging,” Kennedy says.

Still, though, Kennedy says he tries to hip hinge as much as possible.

“I think hip hinging intuitively makes sense, just given how the spine functions,” he says. “So I try very hard to do it.”

So how in the world do you do this mysterious bending? Back in Palo Alto at Jean Couch’s Balance Center, she tells me the trick: Find your fig leaf.

“Stand up and spread your heels about 12 inches apart, with your toes 14 inches apart,” she says. “Now, if you are Adam in the Bible, where would you put a fig leaf?”

“Exactly,” Couch says. “Now put your hand right there, on your fig leaf. When you bend, you want to let this fig leaf — your pubic bone — move through your legs. It moves down and back.”

So I try it. I put my hand on my pubic bone as a pretend fig leaf. Then as I bend my knees a bit, I allow my fig leaf to move through my legs. A little crevice forms right at the top of my legs and my back starts to fold over, like a flat table.

“Now you’re using the large muscles of your hips, such as the glutes, to support the whole weight of your body, instead of the tiny muscles of your back,” says Jenn Sherer, who co-owns the Balance Center with Couch.

And she’s right. My back relaxes, while my hamstrings start to stretch. And boy are they tight!

“Wow! My hamstrings are stretching like crazy,” I yell out, while I’m bent over like a table.

“Yes,” Couch says, chuckling. “That’s why we call it the world’s best hamstring stretch. We find that the bend feels so good for some people, they never want to get back up.”

How To ‘Table’ Bend

To hip hinge:
1. Place your feet about 12 inches apart.
2. Keep your back straight.
3. As you bend your knees, allow your pubic bone to move backward.
4. Fold over by allowing your pubic bone to slide through your legs, down and back.