One of the few super foods that I make sure that I add to my diet is Tumeric.  It has so many amazing properties and I think anyone would be unwise to pass it by. 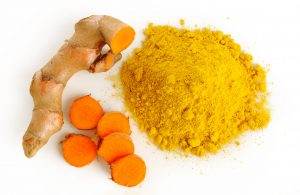 The humble bright yellow spice, turmeric (a relative of the Ginger plant) has been used for its medicinal properties for centuries to help fight an array of health problems including digestive disorders, liver problems, and skin diseases.

Turmeric has also been shown to be effective against diabetes, and in a recent Swedish study the researchers found that turmeric can have a significant impact on the production of insulin in those suffering with diabetes.

More effective than some prescription drugs

Turmeric has been known as a natural pain reliever for years, and it’s been proven to be effective without the serious side effects linked to conventional painkillers.

The numerous health benefits linked to turmeric are the result of the antioxidant power of curcumin — the compound that gives turmeric its bright yellow colour. And now mounting evidence is beginning to show that these antioxidants — known as curcuminoids — can be more effective than some side effect-ridden prescription drugs, including:

A study published in the Phytotherapy Research Journal revealed that the saffron pigment in turmeric, known as curcumina, had a better impact than steroids on managing an inflammatory eye disease.

A study published in the Acta Pharmaceutica Polonie Journal revealed that turmeric worked better than these drugs in reducing depressive behaviour.

Studies have shown that turmeric can be used in patients that are at risk of heart disease (heart attack).

The main side effect associated with aspirin is gastrointestinal bleeding, but it can also affect your liver function.

A survey published in the R&D Journal for Drugs found that turmeric worked more effectively than Lipitor to reduce inflammation and oxidative stress, specifically in patients with type 2 diabetes.

Statin drugs like Lipitor can cause muscle pain, fatigue, depression, memory loss and kidney dysfunction to mention but a few of their many side effects.

The anti-inflammatory power of turmeric comes from its main active ingredient, curcumin, which is a potent antioxidant that helps to fight inflammation.